I received “Multipliers by Liz Wiseman” a month back from my manager as a New Year’s gift. This is probably one of the best management books I have read in recent times. The book is about how to multiply your team’s existing capabilities so that they are able to take on more challenges and deliver much more results. In this post I will share the learning I had from this book.

In my opinion, the main theme of this book is how to deliver more from existing people in your team. We are no longer in the era of behemoths like GE, where a company has infinite budget and hence can hire more people to improve delivery.  As a result, companies try to hire talented people upfront thinking that they will be able to deliver more and with good quality. I have noticed it first hand that companies have a difficult hiring process to keep away “bad” talent. However, when such talented people join the organisation they find the work not commensurate with the difficulty of hiring process. They feel under-utilised  and start looking for other opportunities either within or outside the organisation.

To solve this problem, we need leaders who can increase the productivity of the people around them, be it their peers, managers or team members. Such leaders are called multipliers. Similarly, there are leaders who have the opposite effect of decreasing the efficiency of people around them. Such leaders are termed as diminishers. The book is based on a two years research which studies the working style of both multipliers and diminishers.

The following infographic explains the findings in a nutshell: 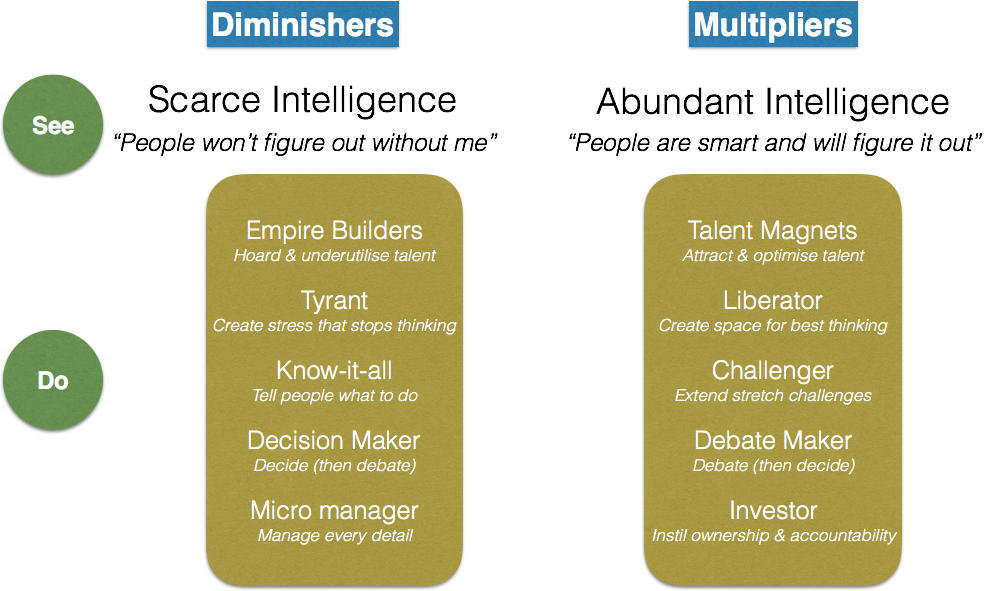 One of the main difference between a diminisher and a multiplier is the way they see people around them. Diminishers are of the opinion that intelligence is scarce and hence they will have to do most of the difficult aspects of a task and show the way to people. On the other hand multipliers think that intelligence is abundant. People are smart enough to figure out how a task has to be done on their own. This fundamental difference in opinion defines the way in which diminishers and multipliers conduct themselves.

It is seen that multipliers are the best bosses. “A players become A+” under them. They see themselves as a genius maker rather than a genius. As a result they attract the best talent through word of mouth. On the other hand, diminishers look for an all star team. They try to gather genius people only to make themselves look good. Once in the team, talent gets stunted.

Multipliers know the strengths and weakness of their people. They give them space and create a safe environment for them to work. On the other hand, diminishers work like a tyrant. They stifle innovation by calling the shots in every aspect.

Know-it-alls give directives that show how much they know. They generally try to be the first ones to give solutions to problems. As a result, the team gives up on thinking and looks up to them for answers. This becomes a self serving cycle, reinforcing the know-it-all attitude.

On the other hand, a challenger tries to foster discussion by asking difficult questions. They try to ask the right questions rather than providing the right answers. When teams reach to a solution by themselves they start behaving like owners.

This facet of diminisher vs challenger is the most tricky in my opinion. There has to be balance between know-it-all and know-nothing-at-all. A challenger should strive to acquire knowledge which is important for them to ask the right questions. Teams generally lose respect for leaders who don’t have much context of the problem at hand as they ask irrelevant questions.

Diminishers are of the opinion that they should provide a decision quickly so that team can start with execution. They think that debate is optional and can be ruled out. However, it is a fact that in every decision debate happens. Either it happens before the decision is made or after. I have been part of the meetings where participants didn’t debate during the meetings but when they got out of the meetings informal debates happened. These informal debates generally don’t affect the decisions but lead to resentments among team members.

In sports, we see that a team’s coach doesn’t jump into the field and actually play for the team. Similarly, multipliers avoid the temptation to jump in and solve problems for the team. Just like an investor, they give required resources to the team so that they can produce results independent of them. Micromanagers on the other hand manage every detail in a way that creates dependence on the them. The team loses sense of ownership and consider the micromanager as a bottleneck.

Apart from discussing multipliers vs diminishers, the book also discusses an interesting concept which I relate to a lot. The concept is that of accidental diminishers. What do organisations do to their high performing employees? They either give them more work or promote them to leadership roles. However, throughout their career, such employees have focussed entirely on their own ideas and capabilities. When they get into managing other people, they generally don’t look beyond themselves. They generally miss out on the talent their new team has. Such leaders become accidental diminishers. Following are some of the ways we become accidental diminishers:

My key take away

My key take away from this book is that move from answers to questions.

Early in our careers we are hired to give answers and solutions as the problem we are working on is less ambiguous. We strive to be smart and have answers to almost everything. However, the value of providing answers diminishes over time. It is very difficult for a CEO to know everything in his/her organisation. On the other hand, the value of asking right questions increases over time. We should learn to ask hard questions which causes other people to pause and think. The end goal is to shift the burden of thinking from ourselves to others in the organisation.

I learnt a lot after reading this book. The concept of accidental diminishers was an eye opener for me. This book will help both individual contributors and managers to become multipliers and help their organisations reach the next level.

Having worked for almost a decade in software engineering, I generally pause and reflect on my journey. Have I produced enough value? Have I gained enough knowledge? Am I considered an expert in the field I work in? If I start over will I end up in the same position as I am now? What do my fellow engineers expect from me?

At times it becomes difficult to proceed in our careers without getting answers to these questions. Some engineers end up switching roles and move to management. However, I am of the opinion that they take some of these questions with them in the new role.

Although I don’t have answers to many of these questions, I do follow some practices which have helped me perform well in different roles through out my career. I wish to share some of them here:

These are some of the things I keep in mind in my everyday. Following these keep the nagging questions at bay for some time!